The Sabarimala controversy, Rahul Gandhi’s gotra and the massive Patel statue have been in the news lately and all involve issues of gender or gender justice.

The Supreme Court ruled that disallowing women from Sabarimala is discriminatory, but large numbers of Ayyappa devotees impassionedly protested the decision. The explanations they give, however, lack merit. That other temples prohibit men is no answer; that is discriminatory too. The idea that women capable of reproduction stay away out of respect for the deity’s vow of celibacy seems rather insulting to him – surely a deity can be celibate without avoiding women altogether? Reproductive capability being a greater seduction is simply bizarre. If the issue is that menstruation makes women impure, then, since humans have all sorts of discharges from their body, picking on just one to label impure is certainly discriminatory.  If the issue is inconvenience to male pilgrims, or the difficulty for women to maintain the discipline required, those explanations, too, appear patronising and discriminatory to women.

Everyone has mindlessly tried to vest a tradition created for convenience with divine authority. Sadly, it only brings back memories of Nadar women not allowed breast-cloths and Dalits disallowed entry into temples as divine diktats. Those have gone; this should go too.

The gotra issue is deeply patriarchal. A person gets their father’s gotra in a rigid way that almost implies transmission through the Y chromosome! Women don’t inherit the Y chromosome – but they get the father’s gotra anyway. Apparently, it matters little who has brought up the child or taught them their religious duties. Rahul Gandhi’s gotra is therefore being contested. He has claimed the same gotra as his great-grandfather, Pandit Nehru. However, since he is descended from Indira Gandhi, Nehru’s daughter, and not down the male line, he apparently cannot inherit that gotra, and is effectively gotra-less, as Indira’s husband was a Parsi.

This is a sociological issue with a religious veneer. The same idea of ‘family’ is there in most of our sub-cultures, including Christian. In Syrian Christians, for instance, the veetu-paire (family name) is the equivalent of the gotra. This too, descends down the male line. Children ‘take’ their father’s veetu-paire, and wives are accepted into the husbands’ families, though husbands are not registered in the wives’.

It surely needs no discussion that this is a patriarchal and medieval custom which is better stopped if we want to develop any real gender equality. It must start with more and more people discarding this custom. Rahul Gandhi seeking out a gotra to validate himself sets a terrible example.

Lastly, the Patel statue. Very obvious here is the size of the statue. The statue was deliberately planned to be the tallest in the world (though it will soon be dwarfed by the Shivaji statue!). The man’s statue stands symbolically clad in iron and double the size of the feminine statue of Liberty. The deliberate seeking of taller, bigger and more powerful symbols, often identified as phallic symbols, also coincides with economic downturns and problems. It is meant to reassure others that all is fine and to project a façade of prosperity and power. These things are often associated with competitive, aggressive and arguably, insecure masculinity.

What are the solutions to these issues? There are no easy answers. But awareness, debate and an ability to look critically and honestly at ourselves is the place to start. 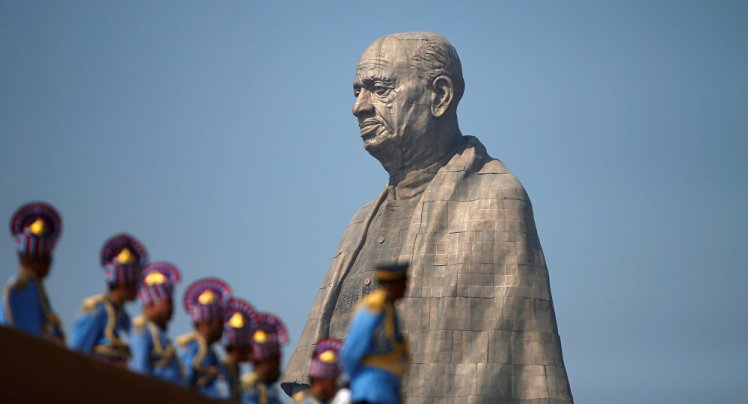