I’m listening to a story of a woman who was recently rescued by police in cooperation with respective district administration from bonded labour. During the medical check-up conducted at the time of rescue, the doctor found out that a baby the woman was carrying in her womb died 48 hours prior the health check. The reason for the infant’s death was mother’s physical exhaustion from work overload that the pregnant mother was forced to. Regardless of her health condition, her employer, an owner of the rice mill in which the woman was held bonded to repay an illegal dept, made her carry heavy bags of paddy. The medical assessment left the woman in a painful sorrow and feeling of irreversible emptiness. This mother is one of many others – men, women and children – that have become victims of bonded labour in a desperate search for work which would secure stable income to sustain them and their families. 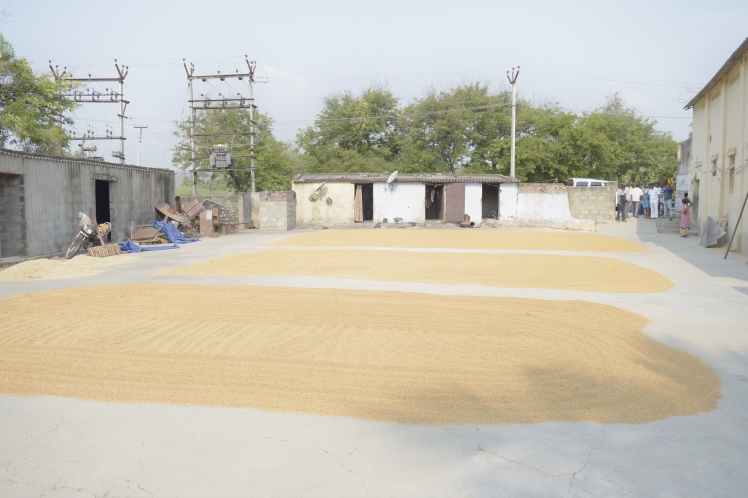 Work and its economical asset (tangible and intangible) is the most fundamental element and dynamic pendulum propelling the functioning of any society. Work is the means to assure a decent living. People all around the world naturally strive for securing decent, peaceful and satisfactory life for themselves and their families. It’s one of the driving forces of humanity – we can call it a “securing” force which moves masses anywhere in the world to find places where there is work opportunities, be it within their region or country or across borders.

Another equally avid force is a force which we can call a “violent exploitative” force – these are individuals and groups of people (less or more organized) who are well aware of the burning need that drives people towards any kind of work. The violent exploitative force sees in these workers a human power which can be (mis)used to generate assets to the detriment of the workers. They misuse the vulnerable position of the work-seekers, especially of those in a desperate situation due to poverty, unpredictable life events, climate changes (lack of water resources being one of them), natural disasters or war conflicts (in case of inter-state migration). The tactics of the exploitative predators are always the same – to search out for those too vulnerable to resist. These are often people with no education, complete illiteracy, persons from rural areas, individuals without personal documents or migrants who don’t know the local language or customs.

Human power is the most expensive factor in the modern labour market. Employers in the formal, organized sector of the economy are bound by regulations like minimum wage, taxes, and provision of health insurance and social insurance for their employees. One of the solutions to growing cost of human power is the ever-increasing automatization of production. Machines work faster and more effectively, increasing production and thus saving employers considerable amount of money. Nevertheless, the process of automatization requires huge initial investment (for example, conversion of a brick kiln into an automatic unit takes an investment of around Rs. 100 crores[1]). Further, certain kinds of jobs cannot be done by machines (for example, flower-picking). And so, despite the enormous progress in production technologies, economically and practically, human power remains the most convenient and irreplaceable generator of assets for many areas of manufacture.

Certain sectors present particularly demanding work conditions such as physically exacting work, environment harmful to health, or work in remote places, which are all less attractive workplaces to the majority of workers (for example, salt pan units or rock queries). Normally, in the formal labour market, employers would use various motivational measures to attract potential job seekers into such challenging work facilities, such as higher remuneration, financial benefits, extra leave days etc. But these measures mean additional costs for the employer. Those who want to exploit aren’t motivated to invest in their employees in such ways. And thus, they use lures, financial traps, threats and violence to bring vulnerable populations into their workforce and ensure they will never leave the respective worksite.

In today’s globalized world, every cent matter. It is the price of work that shifts production centres to places where the human workforce (and thus the overall production of goods) is economically more convenient. The global economies that rely on international trade are pushed to keep the prices of their commodities at the lowest level possible to ensure they are able to attract international purchasers. A fraction of a dollar can decide whether you will have good sales or not. Apart from the unsparing global market, there is also pressure from within. Intra-state competition propelled by technological advancement and enormous un-organized sector presents challenges for micro, small and medium enterprises, esp. manual production units. To employ an individual in the organized sector is at least 1/3 more expensive as compared to the unorganized sector. Although exploitative employers save money, it is the employees themselves who suffer the loss with almost no security for circumstances like the loss of the job, illness, or retirement.

All the factors discussed above can be the reason for an employer to hold his employees in unsatisfactory and illegal work conditions. But the main driver for such treatment of employees are the simple prospect of high profit and the lack of human empathy and compassion causing the exploitative predator to see human beings purely as mere objects – nothing more than generators of assets. These predators of human misery are capable of an absolute separation of the human element from a human being whom they keep in bondage. And so instead of the job opportunities allowing desperate populations to break free from the trap of poverty or overcome acute life event, this exploitative job intensifies the misery and furthers the hope for a normal, stable and prospering life from reach.

The exploitative employers who keep their employees in slavery conditions by not paying fair remuneration, forcing the employees to work long hours without break for food or sufficient rest, physically and verbally abusing them, restricting their freedom of movement, or not paying attention to work conditions harmful to health – such employers rob their employees of considerable wherewithal which these individuals or families could otherwise invest into their lives ensuring proper diet, housing, education, health care or savings for the future. The profit of human trafficking (of which bonded labour is part) in India can be estimated at IND 68,758 crores per year (valid for 2016, taking under consideration the Global Slavery Index estimate of 8 million people being in slavery in India in 2016[2], using the ILO formula for counting the profits of human trafficking and forced labour[3]). This enormous amount of money can be assumed as victims’ loss; means that were supposed to improve their standard of life. The predators of poor are the stumbling block of an effective fight with poverty and the development of underprivileged communities. The predators of the poor are the contra force to the government and civil society who, in joint effort, intensively fight poverty by developing effective measures and programs on national, regional and local level towards its elimination.

It is true all over the world that labour exploitation, repressing human potential and robbing the ordinary citizens of enormous amount of money, undermines in its essence the development of society such as. In places where people work under fair and legal conditions, where they fully enjoy their labour rights and fair remuneration allowing them a decent standard of living for them and their families, in such places we can observe a full bloom of human potential, bloom of communities, and flourishing of society. We can compare this to a race. If a runner wants to win the race, his body needs to be in a perfect health condition. If the runner suffers from even a small health problem like flu or a broken little finger, his whole body will feel it and his performance will be affected. Society is a living organism. If one part of it suffers, the healthy part cannot expect to succeed in the run as it will always feel the pain of the suffering part. Only when all the parts of the society enjoy the same opportunity and possibility of securing decent standard of living by work, only where we ensure that one part of the society doesn’t exploit another one, can we expect that the whole society will prosper and bloom.