The current socio-political atmosphere in India is worrying. The fight against the forces of Fascism is a long one. But what is it that makes this fight so relevant? It is the students who are increasingly coming out at the forefront of it.

In the past few months, I have been constantly asked this question; ‘Why are students leading the protest against the government? Why are they not in their classrooms?’

As a student myself, it made me think, what made it so easy for these young college-going students to courageously be the face of the fight? I wondered what it was that has time and again pushed me and others like me to question authority.

Among the many movements I read about, one particular movement caught my attention. An image that has a striking resemblance to something that happened recently, in India.

One of Times 100 Most Influential Photographs is this Pain-Stricken image. This one image forced the world to think about Apartheid and the violence it incited in South Africa.

The image above shows an agony stricken Mbuyisa Makhubu, an 18-year old, who is holding a lifeless boy (Hector Pieterson) and is running with Antoinette Sithole, Pieterson’s sister.

The story behind this image is one that can have striking parallels drawn even today.

For the people in Soweto, Apartheid was not an issue. Soweto was an exclusively Black community, hence there was no question of facing any racial discrimination. In fact, except for the occasional police superintendent or social worker, most of the children never even encountered white people, let alone face any trouble on that account.

What instigated the change in Soweto, was the making mandatory of Afrikaans-language as a medium of Instruction in Schools. It was a time when the students found it difficult to manage their studies in the English Language, Afrikaans as a medium of studies, making it even harder.

It is important to understand why the imposition of the language was problematic. Afrikaans is a language of Dutch-origin and it was further developed by the white European settlers of Africa. English, was made compulsory by the British when they colonised Africa. The Black South Africans learned English because they understood its use as a language of wider communication.

The propellers of Apartheid, in their policy of divide and rule wanted a separate system of education for the Blacks (even in the urban areas). The Blacks objected to this policy from the start. They saw the “divide-and-conquer” motive behind this plan.

So, the students decided to protest against this and they mobilised youngsters from schools around. It was very clear that younger students (students below high school) were not supposed to be part of the protest.  The protest was planned secretly, yet the news was given out to a few media personnel so that coverage was possible. Sam Nzima, a 42-year-old photojournalist with The World newspaper, was sent out to cover it.

16- year old Antoinette Sithole was also one among the protestors and she was all set to head out on the 16th of July.  Her brother, who was 13, was envious of her as he could not go for the protest.

Away With Afrikaans; Afrikaans Must Be Abolished; We Are Being Certified But Not Educated; were a few slogans and placards being carried around by the young peaceful protestors. For Sithole, all this was very new. She just understood the basic difficulty of having to study in a language she did not want to. That was exactly why she was out on the streets.

It was only a matter of a few minutes before the peaceful protest turned violent.  She heard a bang, and thick clouds of teargas filled the streets. Police were seen marching down the streets and shouting at the students, asking them to disperse. It was amidst the havoc and the chaos around, that she suddenly spotted her younger brother across the street.

Hector, her brother was too young to understand what was going on. Sithole put on the brave older sister’s face and asked her brother to stay put, while she tried to find a quiet way of getting him home safely.  She was terrified. A little while later, Sithole returned to the street, only to find her brother missing. Meanwhile, the police were shooting around at random.

Sithole, from some corner, managed to spot a man, run past with a body in his hands. She saw her brother’s shoes and it rattled her. Sithole tried to catch up with the man and she kept asking him where he was taking her brother. The man just kept running and did not answer her. As Sithole looked more closely she saw her brother’s body, with blood coming out from the side of his mouth. A car screeched to a halt in front of them to transport the boy to a nearby medical clinic, but it was already too late. “He’s dead,” the man told Sithole, as he placed the body in the car. For Sithole, those two words changed her entire life. As a 16- year old, she could not fathom how her holding a placard and walking on the streets of Soweto, protesting against mandatory Afrikaans, could actually kill her innocent brother. She was only out on the streets because she already found English hard, but now Afrikaans was going to make it another uphill task.

In fact, Sithole did not even know the man who was carrying her brother. It was only two years later that she learned the name of the man who had tried to save her brother.

18- year-old Mbuyisa Makhubo, had already finished school, so he wasn’t part of the protest. He was at home when he heard the gunfire and he came out to help because he knew the Police were out to kill the children. It is important to note how Mbuyisa came out in support of the younger children, who were completely unknown to him. 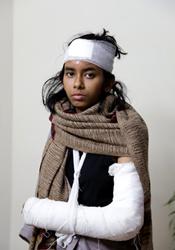 For most, the above image is well-known. The image of the Student Union President of the Prestigious Jawaharlal Nehru University, Delhi, soon after receiving medical help after the brutal attack on her.

The story behind this image is a striking parallel to the one from the Soweto uprising.

On 4th January 2020, the students from this University were protesting against the arbitrary rules of the college administration. Their protest was silent, peaceful, outside one office on the campus.

In retaliation to the protest, on 5th January, few masked people who were armed stormed into the campus and started mercilessly attacking the students and teachers. These goons were armed with iron rods, sticks, baseball bats and stones, and they smashed windows and vandalized student dormitories. The students on campus feared for their life.

Aishe Ghosh, who was among the peaceful protestors was beaten on her head, while many other students and teachers were also mercilessly attacked. While all this was happening, the police forces were quietly standing outside the gates of the university. Over 30 students and staff were injured in the violence, some severely.

It is painful to see how educational institutions are turned into a place of violence and hate. Yet, much like in 1976, the fight in 2020 remains the same. The fight against the forces of hate, fascism, and bigotry.

In Soweto, the students were protesting against making compulsory the language-Afrikaans as a medium of study. But, theirs was a bigger fight against Apartheid, against white supremacy and brutality. In comparison, in 2020, the JNU students were protesting against the arbitrary rules of the university administration, yet, their fight is against the bigger forces of hate, fascism, and brutality.

In both cases, the state forces, that are meant to protect its citizens was found to be not doing their job, rather encouraging and further inciting violence.

Even though the students were afraid, were beaten, they continued their fight.

Universities and schools are meant to be safe spaces for students. They are meant to be a place of learning, a place of freedom, a place of liberation. But the state forces have time and again targeted and taken away this freedom from the university students. These students are fighting for an education, for peace and for their safe spaces to return. Their autonomy has been taken away from them, time and again. That is why students are on the streets today and not in their classrooms.

The bigger challenge today is the lack of unity among the citizens to come together with these students in the fight. Much like Mbuyisa, who did not know the children who were out on the streets, neither was he out to protest, he came out to help. He came out simply because he understood the relevance of the fight and the unwillingness of the state forces to complete their job.

As a university student, recent JNU violence is very personal to me. My parents put me in the hostel, considering it was safe and it was a nightmare to even imagine going back into my hostel again.

Inputs are taken from: